I'm a conquistador, watch me sparkle. 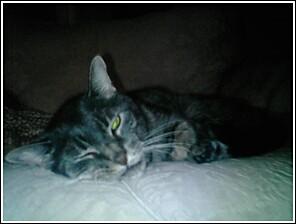 my mom comes by the house this morning, and notices that my cat has a tooth jutting out of his mouth. we had noticed that his mouth had started to elvis on one side. but we just figured it was him and his old age. his breath was worse these days. that was a bad sign. we knew that he could not eat without his canine tooth (i called it a feline tooth in a moment of deflection)and that his quality of life would continue to decline. so we called the vet, and asked to come in to see her. so we crammed and pushed him into the small dark blue meshed carrier that he hates so very much. he cried and meowed. we get to the office, and we wait. and wait. she finally walks through the door… he sits quietly. as my mom and i talk to her, she unzips the carrier. he digs his back claws into the vinyl as she grabs his collar. she says how thin he is, that his breath smells. diabetes works the same way in people as animals, she says. his bad breath, his all over odor… renal failure. she suggests euthanasia. she also gives an alternative… insulin and other things. thats unfair to him… to us. he was in pain. a loose tooth(and losing more soon), arthritis, hearing, smell… he would continue to suffer. so they tried to hold him, and give him a sedative. instantly, he was a kitten again. swiping and tossing himself around. soon his eyes drifted, his head rocked from side to side. he licked the air. he opened and closed his mouth many times. my cat had always had a sensitive stomach. so the sedative made him vomit. white foam and mucus. his legs gave out, and he slid down the side of the carrier where he sought safety. he fell in his vomit as he went to sleep. his breathing turned into short shallow pants. his eyes stayed open as he slept. then the vet came in. she cleaned him up a bit, zipped up his carrier. set him on the towel. then, a shot in the leg. and his shallow pants stopped. and he was still. they asked us if we wanted his ashes. i wanted them, then i decided against having them. it would have been too hard to let go otherwise. i have his collar. i have some of his toys. thats all i need. i dont want to forget. he was my cat. i was the only one that could rub his belly. he would come down off the 10 foot carpeted cat tree in the living room and jump in my lap every night i came home from work. just for me. he used to sleep on my bed all the time. i had that cat half of my life. i used to sing for him, and only him. i could talk to him, and he would just look at me. i could tell him anything because he couldnt say anything back. he was thin, dehydrated, smelly, and a little senile i think. but he was my cat. he was my old man. my bubba. my kitty-fizzle. i love you dylan. may the next world give you salmon, catnip, and a good set of teeth.